The July custard calendar is up!  We tried to predict the flavors last night, thinking there would be an abundance of fruit flavors and maybe something like apple pie for the Wednesday flavor because of Independence Day, but we were only partially right. 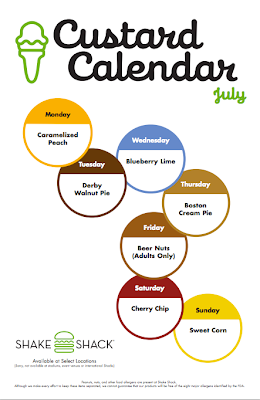 Monday - caramelized peach - we were thinking there might be something peach on this month's calendar and we were right!  We're looking forward to this one and hoping it's good.

Tuesday - derby walnut pie - we tried this in May and it was a chocolate-walnut combination topped with actual walnut pieces.  We were pleasantly surprised by this and liked it quite a bit.

Wednesday - blueberry lime - we are intrigued by this one.  A isn't sure how the two fruits will pair while I think it sounds more like a good sorbet flavor.  I guess we'll see how it goes!

Thursday - boston cream pie - A and I had mixed reviews of this one in April.  I liked that it tasted like a donut, but A was expecting the flavors of Boston cream pie and was a bit let down.

Friday - beer nuts - this is the first "adults only" flavor we've ever seen at Shake Shack (is this the start of a new line of custards? Are mojito and margarita coming soon?) but it's a little confusing to us because beer nuts are just glazed peanuts.  Are they giving the custard out with beer?  We'll have to test this out. Edit after reading Shake Shack's Facebook post on the custards: Apparently it's made with Brooklyn Brewery's ShackMeister Ale.  So now we're thinking that it's peanuts and beer mixed together, since beer nuts are supposed to be eaten with beer!

Saturday - cherry chip - we're not sure what to expect from this one.  Vanilla with cherry chip pieces?  Cherry with chocolate chips?  Google tells me that Betty Crocker makes a cherry chip cake mix - will it be like that?  Another one we'll have to test out.

Sunday - sweet corn - we tried this one a couple of years ago but never wrote about it. I remember not tasting corn at all and only vanilla, while A remembers vanilla and only a hint of corn.  Maybe it's improved since then. Since we've never written about it, we may have to try it again...