Pho Mac, located near the Staten Island Expressway, is the only Vietnamese restaurant that we know of in Staten Island.  We haven't been there in awhile and decided to check it out for dinner over the weekend.

We started with gỏi cuốn (summer rolls), which are rice paper wrappers filled with shrimp, vegetables and rice vermicelli.  This one was served with a warm peanut sauce. 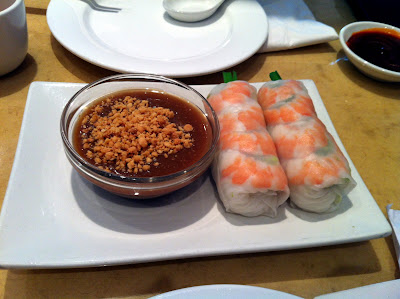 Each summer roll had 4 big pieces of shrimp and was well-stuffed with the shrimp, the scallions and the vermicelli.  They definitely didn't skimp on the ingredients.  The only problem was that there wasn't a lot of herbs or flavoring to the roll other than the shrimp.  We were expecting basil or mint, neither of which appeared to be present. The peanut sauce being served warm instead of cool was also different for us, but we didn't love it as much as some other sauces we've had with summer rolls.  It was a little bland.

A got the Phở đặc biệt + bò viên which is described as "combination special big bowl with beef ball". 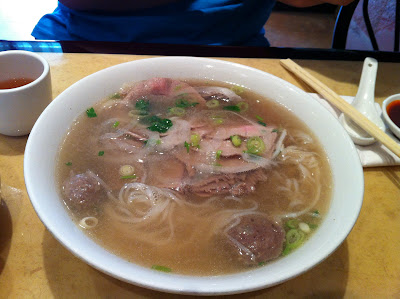 The pho has well done flank steak, brisket, eye of round, tendon, omosa (tripe), and beef balls. It's served in a beef broth with scallions and onions cooked in. The meat and the noodles also come with an accompaniment of thai basil, bean sprouts, lemon/lime, hoison sauce, and sriracha. You don't have to use everything, but A always does.

A always follows the same ritual with his pho. The very first thing he does is taste the broth itself. He likes savoring the rich broth by itself before adding in the flavoring. First he squeezes the lime/lemon in, dumps in the bean sprouts into the middle of the bowl, spreads the thai basil in circular patterns around the bowl, squeezes on sriracha in a spiral pattern, and then finally squeezes on some hoisin sauce in a criss-cross pattern. M likes it because she finds it artistic. 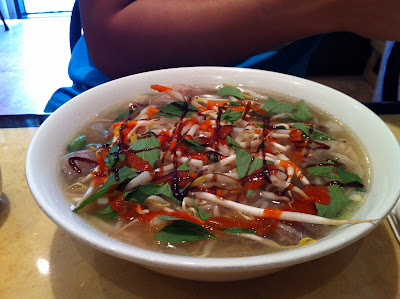 Overall, the broth was a little thin and weak in comparison to the better pho A has had in his lifetime. It actually tasted a little like chicken broth instead of beef broth. The proteins were of very good quality, and the additional ingredients were all very fresh. They couldn't make up for the somewhat weak broth, though. While this certainly wasn't the best bowl of pho A has had, it certainly fulfilled a craving.

M got cơm gà xào xả ớt (lemongrass chili chicken).  It was described on the menu as chicken, lemongrass, green peppers and onions with white rice, and what came out of the kitchen was pretty much what M expected. 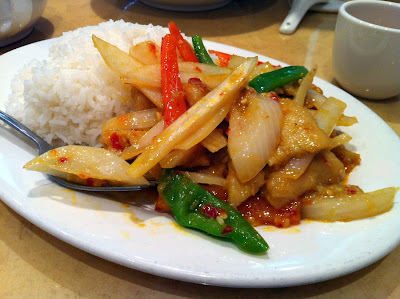 M liked the chicken dish.  It had very thin pieces of chicken stir-fried with slices of onions, green peppers and red peppers, with a sauce made with lemongrass and chili.  It wasn't that spicy but there was a nice zesty flavor to accompany the chicken and vegetables.  After the bland summer rolls, the spice was good.

Pho Mac isn't the best Vietnamese food we've had (that is still back on Argyle in Chicago), but in the sea of pizza, Italian restaurants, chains and diners on Staten Island, it's a nice change of scenery.
Posted by M and A at 1:47 AM