A got the American Globs. 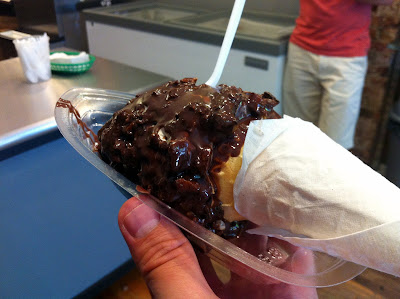 This ice cream concoction is soft serve vanilla on a cone topped with pretzel pieces, sea salt, and dipped in chocolate. A had originally thought of getting something else, but after seeing one Glob go out, he opted instead to follow suit. The chocolate dip solidifies nicely like with any NYC ice cream truck offering, but the addition of the sea salt and the pretzel pieces was really nice. The saltiness of each component really brought out the flavor of the chocolate, and the pretzel pieces added texture to the overall dish. The only downside of this cone is that once you get to the cone itself, that part is boring when compared back to the top portion. As someone that really enjoys ice cream, though, A dealt with it.

M thought about ice cream but in hot weather, all she craves is popsicles.  Big Gay Ice Cream Shop has popsicles/paletas from La Newyorkina in multiple flavors and M went for rainbow. 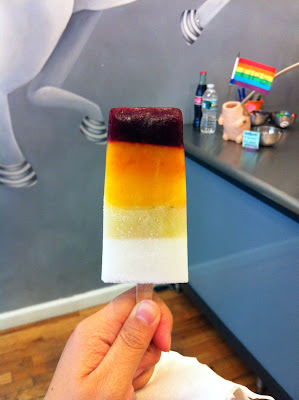 The rainbow popsicle had 5 flavors - hibiscus, passionfruit, mango (we think), cucumber lime, and coconut.  If M could, she would have flipped the popsicle over so that the hibiscus and passionfruit were at the end and she could save the best for last.  It was a great cooling treat.

We have been to the truck plenty of times in the past, but every time we have thought about visiting the shop it was always packed. Thankfully this time we were able to get in. The store has some additional offerings like the ice pops and also ice cream sandwiches. Even if you have gone to the truck, the store is definitely worth a trip if you can make it.
Posted by M and A at 12:23 AM